Want me to write about anything particular? Suggest below!
Request received!
Uh oh, something went wrong!
Email jordan@jordanhayashi.com if this problem persists

Jul 11, 2016
Last week, I travelled to Thailand, Cambodia, Vietnam and Taiwan. Here's a photo blog of my highlights!

The trip started with a 20+ hour journey across the world. I decided not to bring my main camera kit on the trip and opted for my more portable mirrorless camera. I felt the separation anxiety immediately, but I guess it's good to practice with a fixed (20mm, 32mm equiv) lens. And it would be nice not having to carry a 10 pound kit everywhere I go.

Our first flight was from SLO to LA, then to Tokyo for a 3 hour layover. We went to a lounge to await our next flight, where we ran into an uncle of ours! What were the odds? Just as the shock was wearing off, I hear someone call my name. Sure enough, two more friends were in the lounge as well! Hursuong and Hurnan were on their way back from China and I got to catch up with them before leaving for Bangkok. 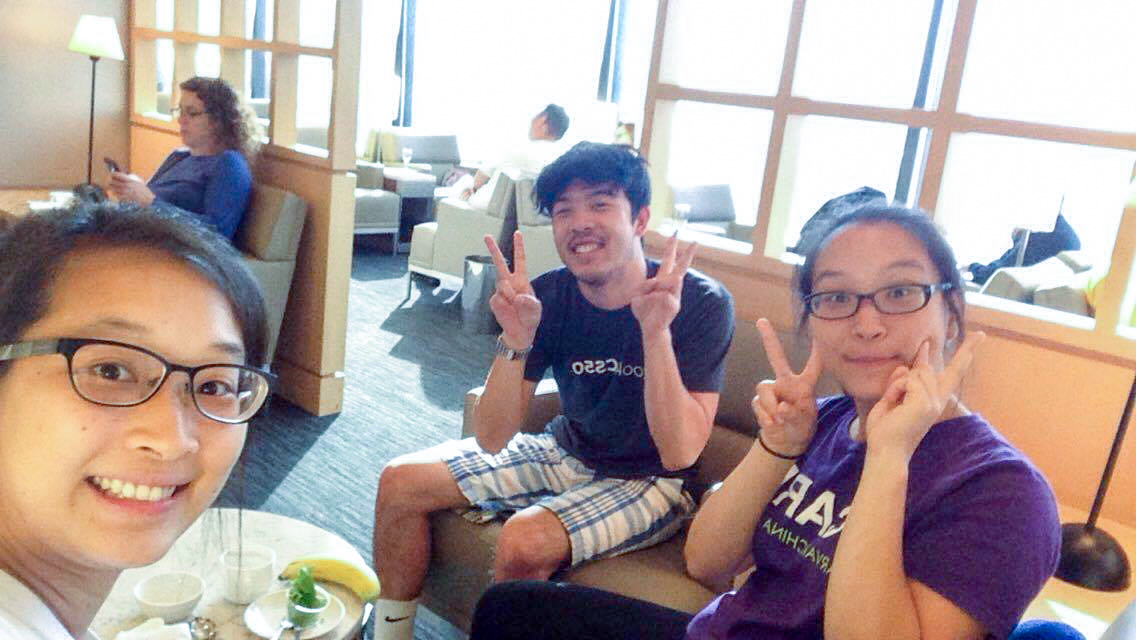 Click any of the cities below to expand the sections!

Surprisingly, the jetlag wasn't too bad the first day. So we headed to Wat Pho (no relation to the delicious Vietnamese noodles) temple at 9a to catch the monks doing a chanting ritual. Then we headed to the Grand Palace, where we saw some extravagant buildings built for the royal family.

Even though it was around 95 degrees out, there was a pretty strict dress code. So for a whopping $3, I ended up with a new pair of stylish pants.

Oh and also at the Grand Palace, we saw this armed guard. The bayonet would probably be deadly at close range, but not sure how he's supposed to use his rifle with no bullets... 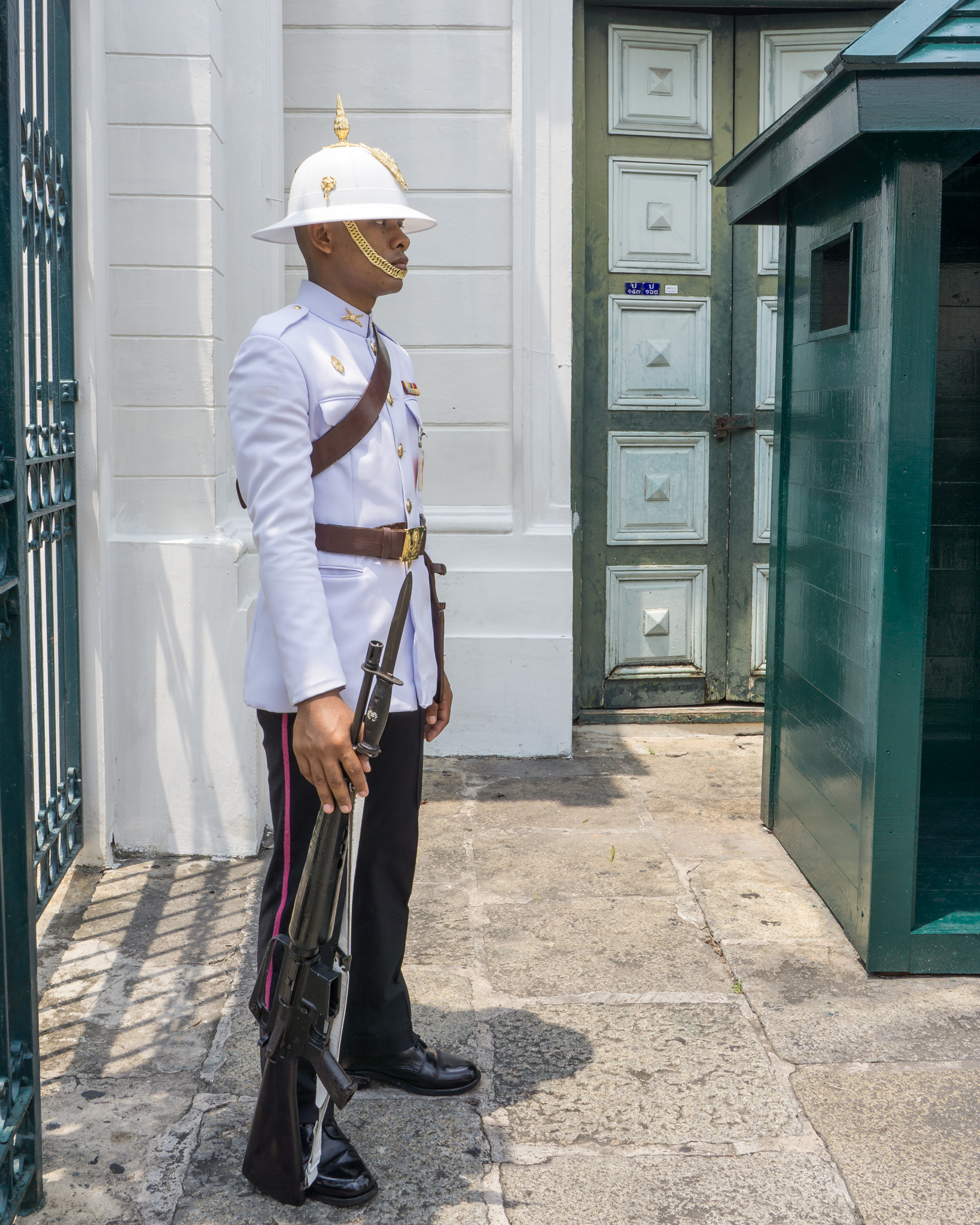 Our second day in Bangkok was a nice flashback to Venice. We took a long tail boat across the river then down a few canals. It was nice to get out of the more touristy areas and get to see some houses along the water. Though some of them looked ready to collapse into the river...

Well this morning could've been the highlight of my trip, but the Warriors lost >:( 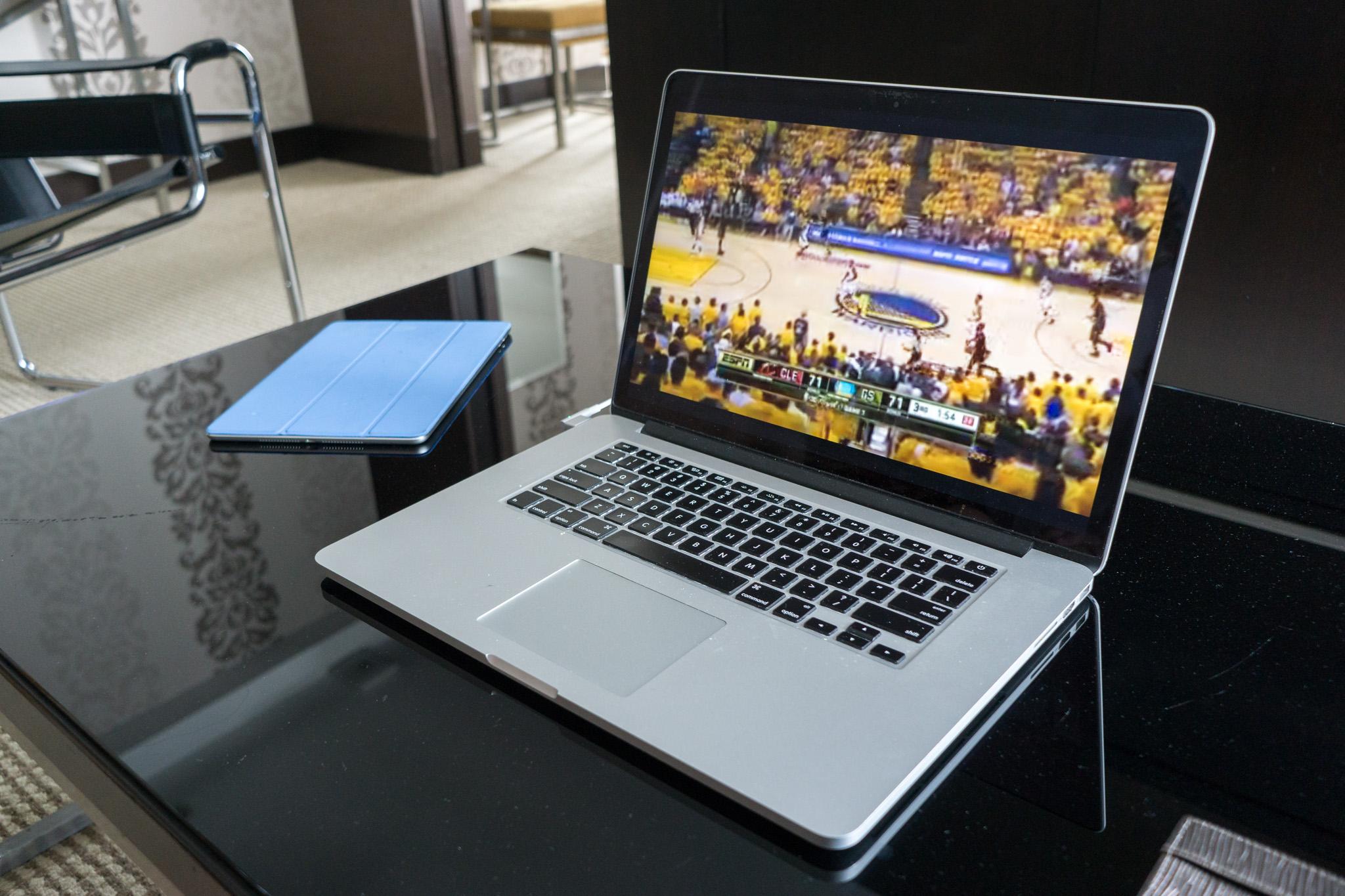 Watching the NBA Finals on spotty internet in the hotel

After watching the game, we headed out to two street markets. It was crazy to see how hard the people worked in order to earn $1-5 dollars a day. To get from one market to the other, we rode in a "tuk tuk," a motorcycle retrofitted with a cage and seating area for passengers.

I'll preface this section by saying that Cambodia has some really awesome ruins. I forget the exact number that was mentioned, but I believe that there have been something like 5000+ temples discovered, with more being discovered every year. And one of the main reasons that there are so many unexplored areas is that there are lots of armed land mines left from the Vietnam war. GG Nixon...

We started our Siem Reap exploration at Angkor Wat, Cambodia's most famous temple complex (and the largest religious monument in the world @ 162.6 hectares [thanks, Wikipedia]). We hiked over to the main temple for sunrise, which means that we got to see the backside at dawn. Spooky.

I was a little surprised that tourists were allowed to wander around inside the temple, since it was sandstone and fragile. But they let us in and I snapped a couple pics. 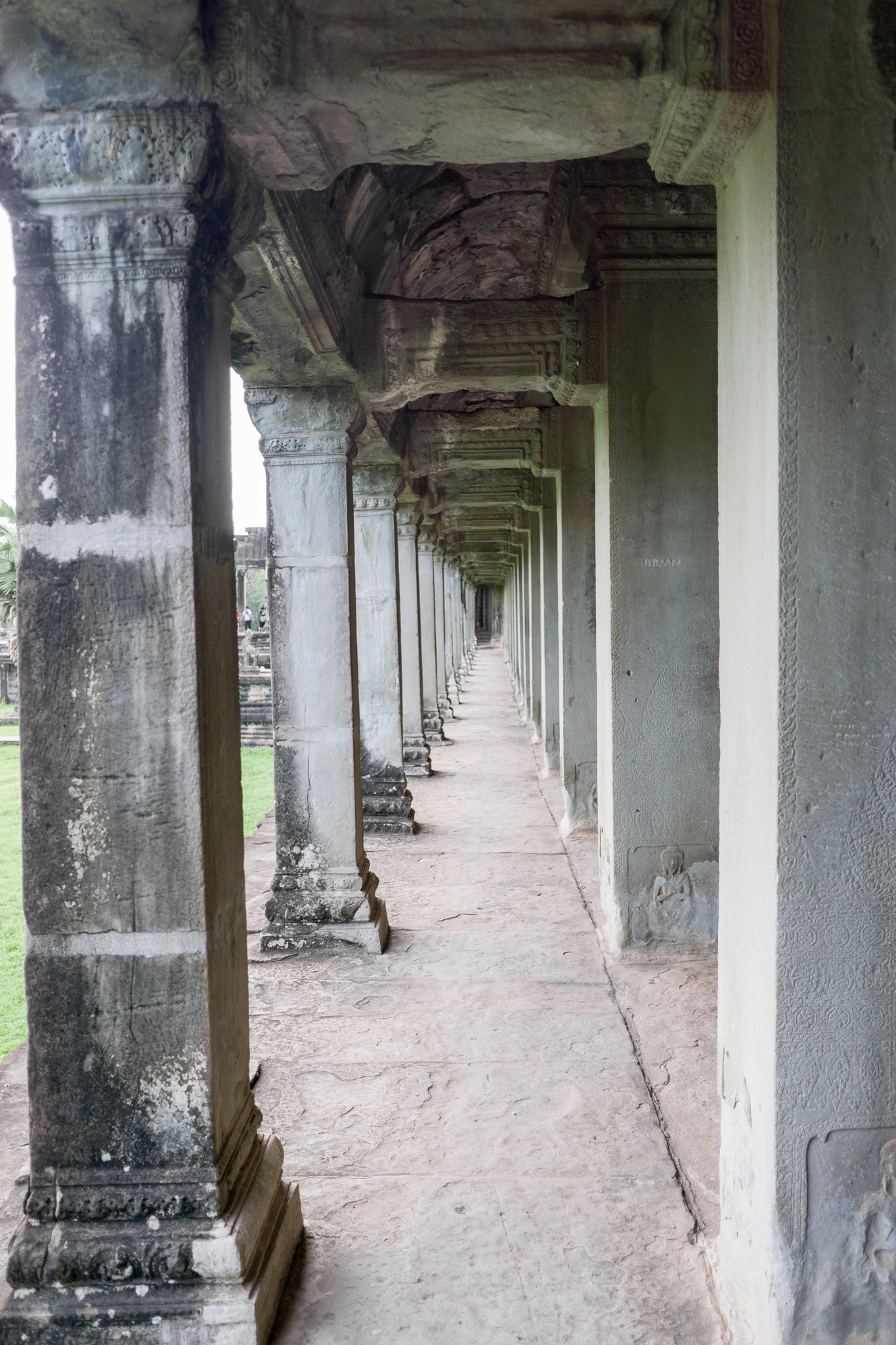 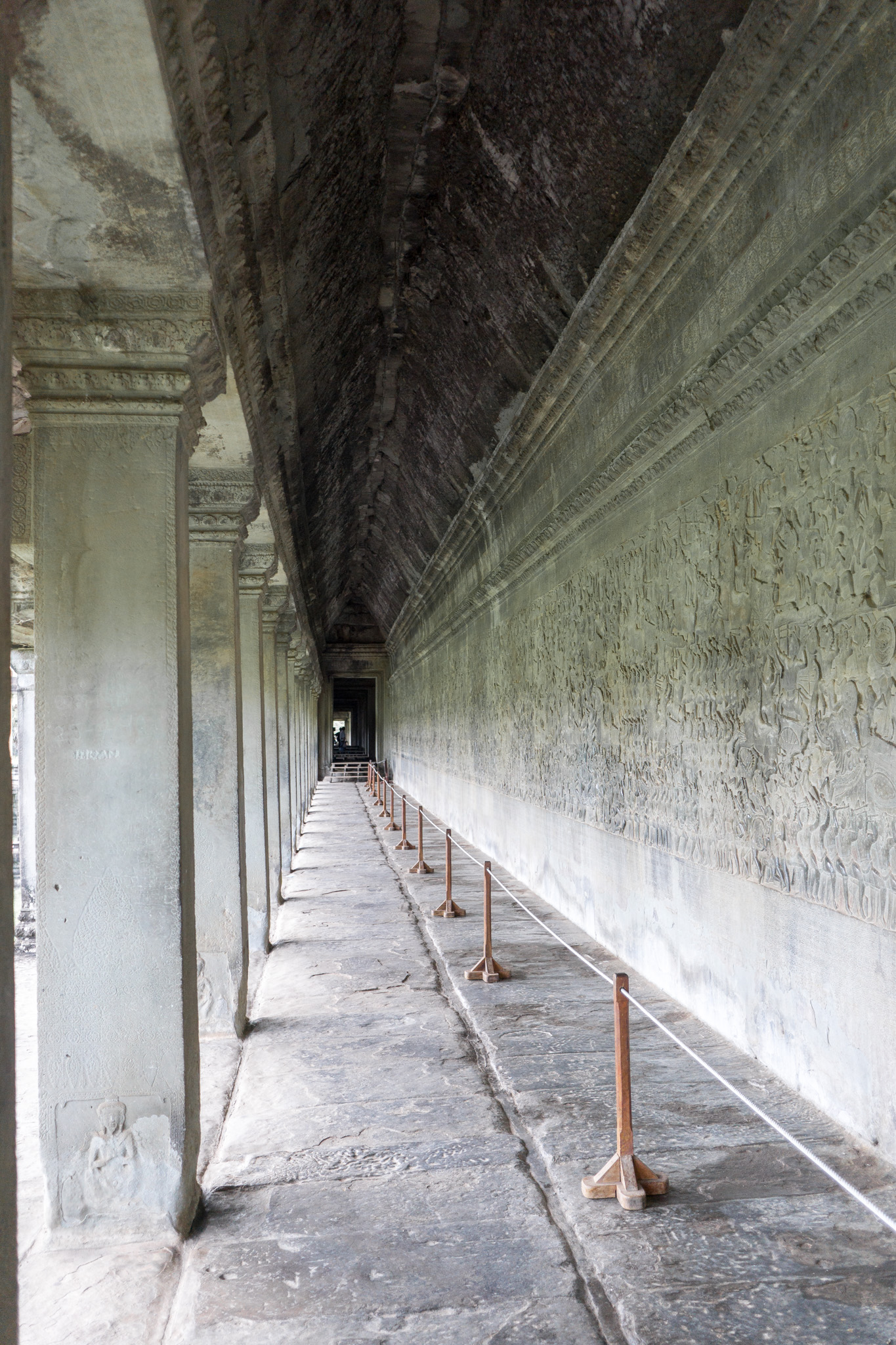 Some nice geometry in the halls 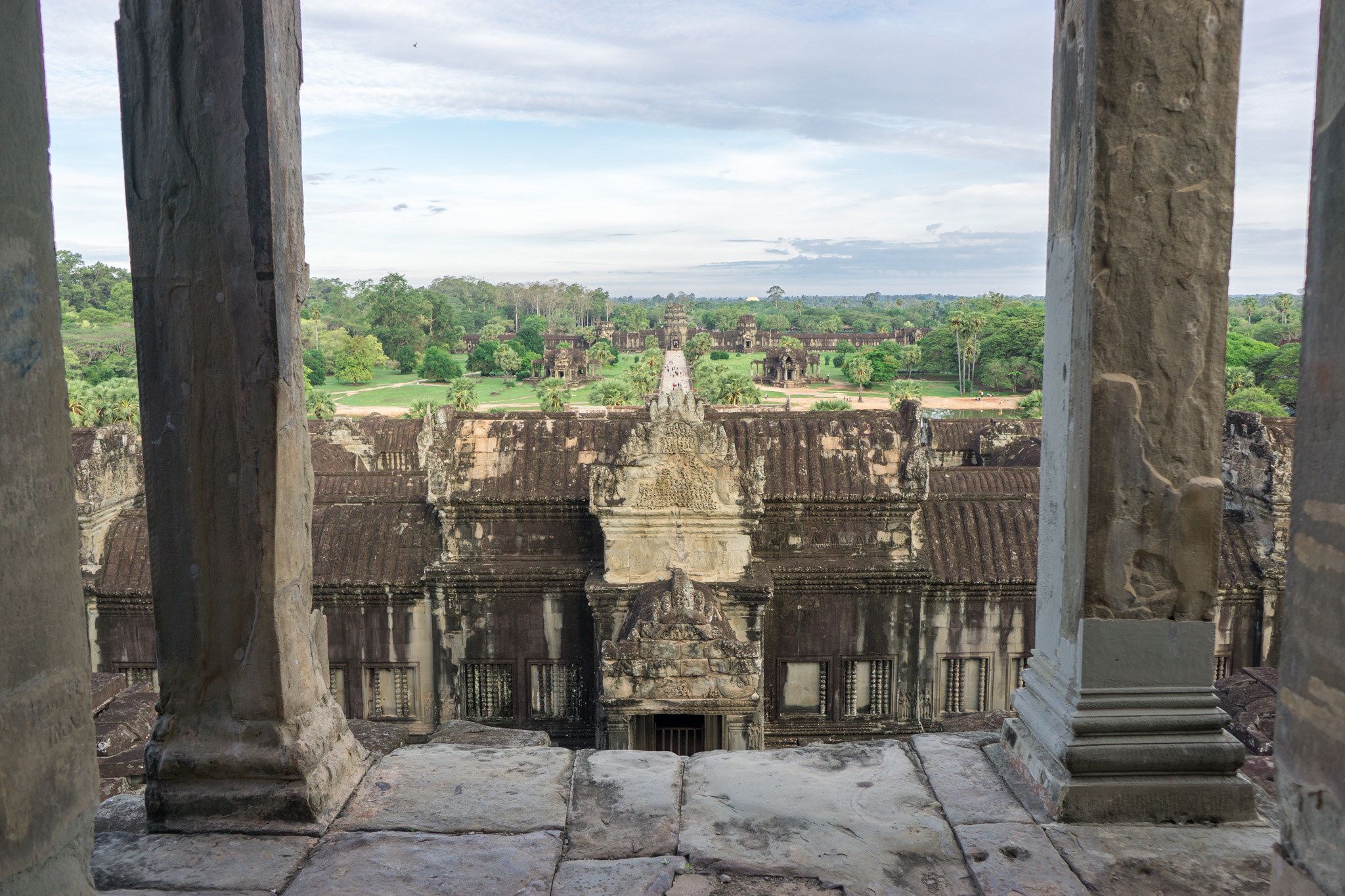 The view from the top

After Angkor Wat, we went to see possibly one of the coolest temples ever. It's called Ta Prohm, and it was a film site for Lara Croft, Tomb Raider. It was built in the late 12th century, and has since been taken over by nature. There are trees growing through walls, on top of structures, and even through the temples. I can see why they thought it would be a great movie set.

And now it was time for the highlight of the trip, a "leisurely 60km mountain bike ride through the beautiful countryside." It's funny cause we were afraid that the distance was going to be too much. What we really should have been afraid of was the fact that we were in Cambodia during their rainy season...

Believe it or not, it was hot and sunny less than an hour later. It's okay, I was used to bipolar weather. To quote Juan Bedoya, "I'm a seasoned New Yorker."
The weather was so nice that we went to see more temples: Bakong and Preah Ko "The Temple of the Cows"

Relax day! And by relax, I mean deep tissue massage. It wasn't very relaxing at first. But once you get used to the pain it's actually pretty nice. The rest of the day was filled with coding and a plane ride to Vietnam.

We spent the day exploring Ha Noi. The highlight was probably the food, but I tended to eat it before I'd remember to take pictures. Oops. We had authentic Ha Noi pho, bun cha, and a whole bunch of other foods that I can't remember the names of. We also visited the Ho Chi Minh Mausoleum, but they confiscated cameras inside. I only took one picture the entire day:

Our day started at 6a as we packed for a 24 hour cruise in Halong Bay. It was a 4.5 hour drive to the boat, but well worth the drive. The cruise left port at noon and headed to Titop Island, where we hiked for an hour. The hike was nothing compared to the bike ride two days prior.

On the second day of the cruise, we stopped at Sung Sot Cave.

After disembarking, we headed back for Ha Noi. We stopped at a market that looked suspiciously like a sweatshop. We were assured that it wasn't and the prices confirmed it. $400 for a sewn painting? Dang... 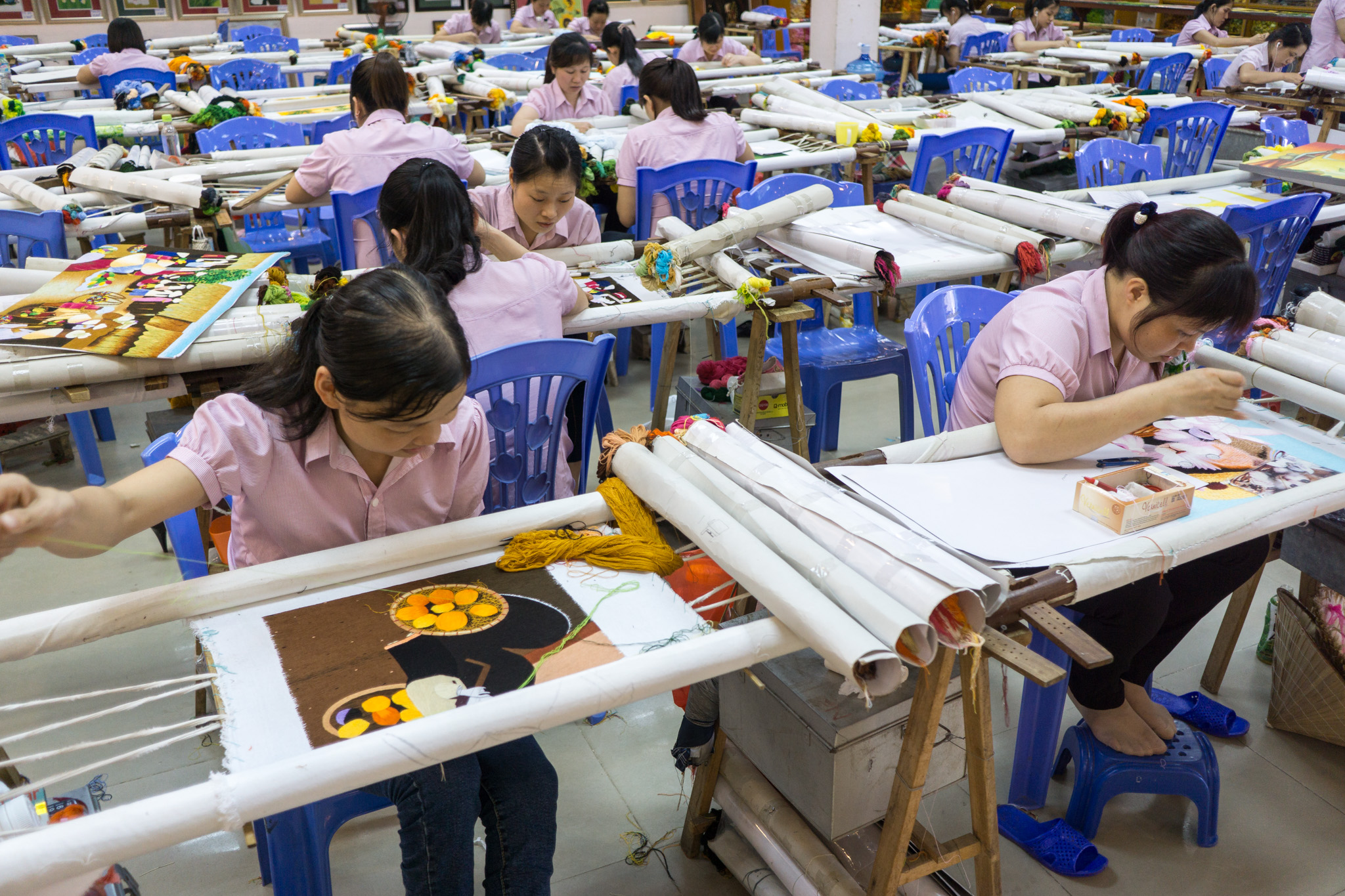 Oh and also, this was the day where I had my shoes stolen right off my feet! As we were exiting a restaurant from lunch, a guy with a shoe shining kit started tugging on my flip-flops to pull them off my feet. At first I resisted, gripping the sandal with my toes (it was pretty funny actually, he couldn't pull them off my feet and he was trying pretty hard), but I saw that my dad was also getting his shoes shined so I relented. But before I let him shine my shoes, I made sure to agree on a price ($2).

Anyways, he shines my flip-flops, then throws a huge glop of shoe glue to the bottom. Before I had time to protest, he was already applying a rubber sole to the worn area of my sandals. It was actually pretty impressive how quickly he finished the job, but he wanted $25 for everything! Like whaaa? Who shines flip-flops in the first place? And why the heck would I pay $25 for a half of a rubber sole when I could just buy a brand new pair of Rainbows (the brand of sandal) for $40? I ended up paying him $5 and now I'm stuck with what feels like high heels until the sole wears down or falls off. 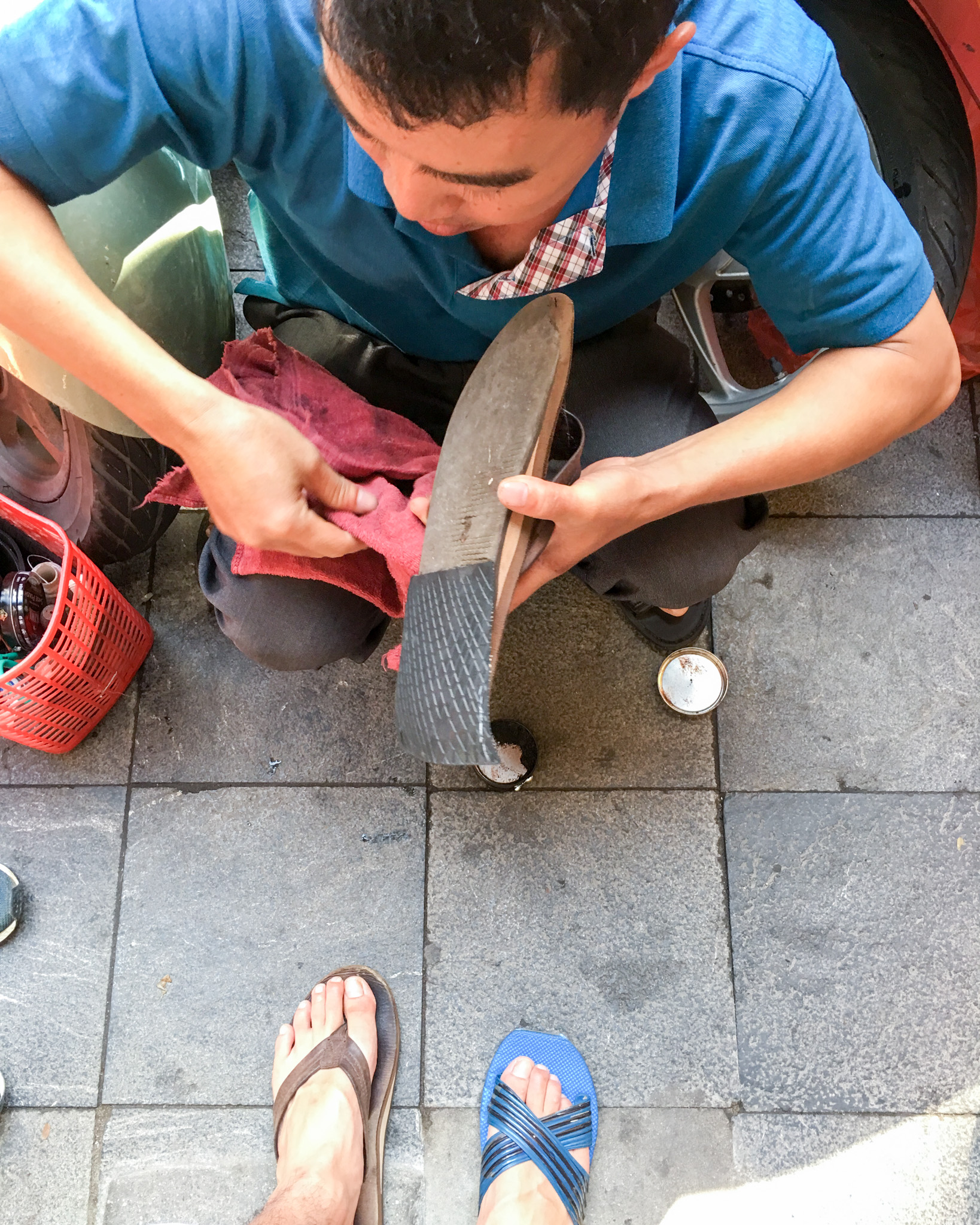 Getting ripped off by a shoe shiner

My mom and sister went to a cooking class, my dad headed home, and I stayed in the hotel and worked. And I got a lot done (not sarcasm). Then we headed to Taiwan.

Back in the homeland! I hadn't been to Taiwan for 10 years, so it was great to be back. And I hadn't lost any of my Chinese! (I don't speak Chinese, so yeah.) First thing first, had to find 豆浆油条 (dou jiang you tiao: soymilk with fried dough). 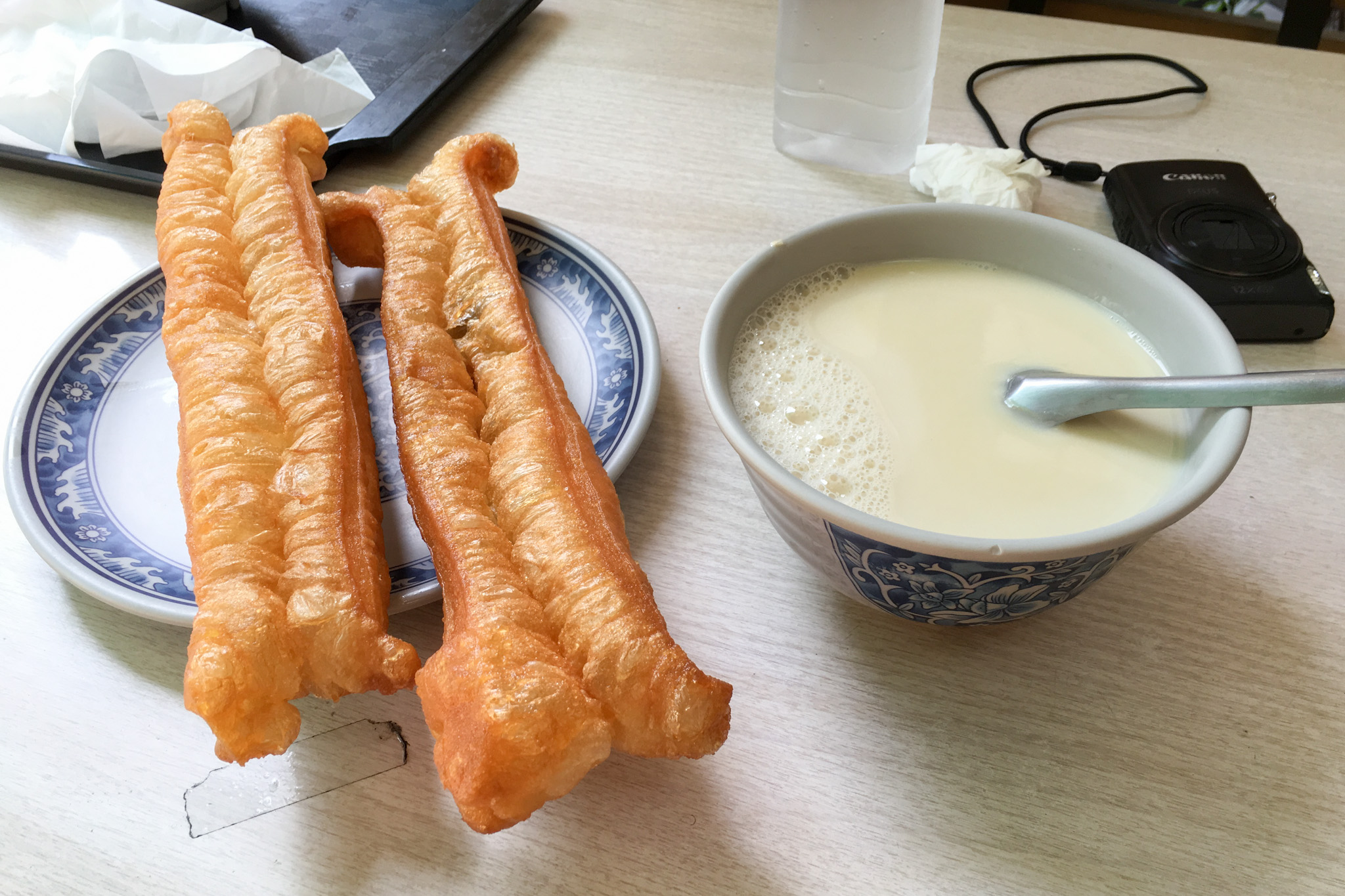 The after getting some work done during the day, it was time for dinner at a night market.

It was another early morning as we tried to get to Fo Guang Shan ("Buddha's Light Mountain") Buddha Memorial Center before any crowds. The monastery houses a 36 meter tall Buddha statue which is 108 meters above the ground. It's apparently the largest in the world, but I swear I've heard the same claim at a temple in Japan...

The Buddha Memorial Center houses a Buddha tooth relic, as well as a time capsule that gets opened every 100 years. Too bad we went 94 years early. This kinda made me wish that I had put something in the Harvard time capsule. Oh well. 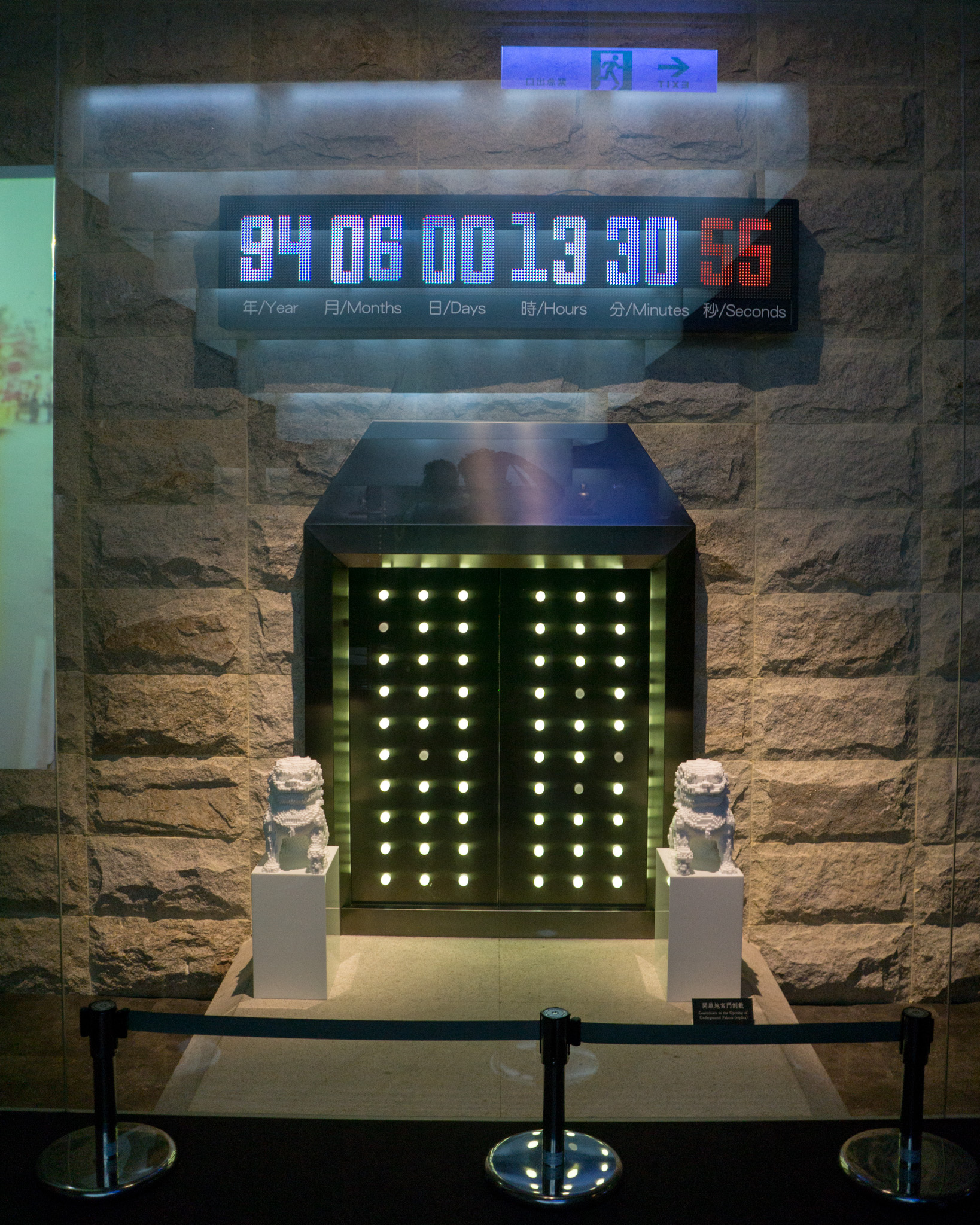 Only 94 more years 'til the gates open

After the Buddha Memorial Center, we took the high speed rail over to Taipei.

For dinner, I had the best xiaolongbio of my life from Din Tai Fung. Thanks Winnie and Anita for the recommendation!

The last day of our trip! We hiked up Elephant Mountain in the morning to beat the heat. There was no avoiding the heat, but the view from the top was amazing! You could clearly see 101 (the tallest building in the world until 2009), as well as the entire city.

We spent the rest of the day at National Palace Museum, but they banned cameras and I didn't really want to get kicked out. We finished the trip at another night market. 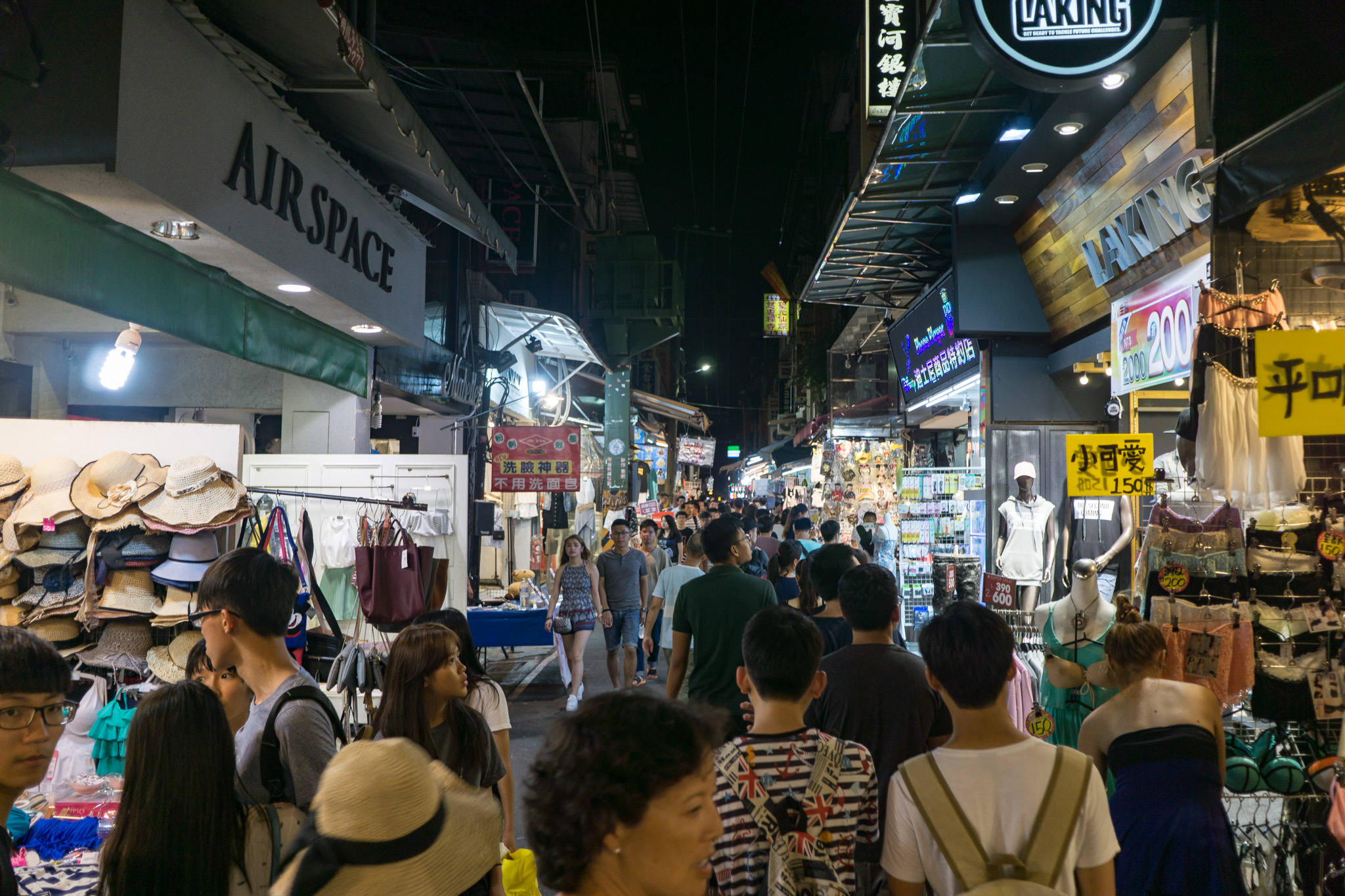 Finishing the trip at a night market. Note the name of the store on the left

Well I'm impressed you read this far. Thanks for reading, and subscribe in the navbar above if you want an update the next time I post to the blog!

'Til next time,
J