Want me to write about anything particular? Suggest below!
Request received!
Uh oh, something went wrong!
Email jordan@jordanhayashi.com if this problem persists

Jul 22, 2017
Last week, I spent some time in the Middle East with my family. Here are some photos and highlights!

My flight to Tel Aviv left JFK on a Monday night, so I decided to work from NY on Monday and spent the weekend in the city. My trip began Friday, when I took a train to NYC straight from work.

Click any of the titles below to expand their section!

I headed from the train station to catch up with my friend, Ray, for ramen and beers (at two different restaurants, but definitely let me know if there are restaurants that serve good ramen and good beer). Ray and I discussed life, statistics, and our luck playing credit-card roulette with coworkers (good news, I'm much luckier than he is!). He also mentioned wanting to write more often, which reminded me that I should try to keep my blog more updated. I've always enjoyed talking with Ray, since we tend to analyze life in a similar manner.

I had planned to have brunch with a couple friends before I knew that my NYC-based family had lunch together every Saturday. Fortunately, my friends were flexible and I was able to join my family's weekly meal. The NY-fam was doing well, and I talked about work with my uncle, who's worked at IBM for longer than I can remember. It was interesting comparing the work that I do at an agile startup with the more research-centric work that my uncle does at a large company. I think I'll stick with the startup life for the foreseeable future.

After lunch, I spent some time wandering, catching up, and going to the gym with my college best friend and roommate, Colton. He seems to be doing well in medical school, and has been going to the gym more diligently than I have. We headed to Chinatown for dinner with Annie, also a college (girl)friend. After filling up on Chinese food, we tried some interesting drinks at a nearby speakeasy, hung out in a strange bar, then spent the rest of the night enjoying the rooftop of Annie's apartment complex.

The next morning, Annie, Colton, and I went to a fancy brunch place and ended up looking at puppies while waiting for a table. We wandered a bit after brunch, then I packed my stuff and went out for dinner with Jennifer.

Jennifer and I caught up and discussed going back to school, since she and I are both taking time off to work on/at startups. I helped them out on their company website before crashing for the night. The next day, I left for Israel!

After landing in Tel Aviv airport, Lauren (my sister) and I took a taxi straight to Jerusalem to meet our parents. I found it pretty cool that we could take a taxi from one edge of a country to the other, but maybe that's just a bias I have from living in such a massive country. We picked up some food and headed to bed in preparation for a packed itinerary the next few days.

There's so much history in Jerusalem that it feels wrong to distill it into a few paragraphs. I'm pretty bad when it comes to knowing world history, which made it especially cool to learn about a city that has so much significance to so many religions. We spent the first half of the day exploring the Old City, the area within the city walls. We walked along the wall and could see multiple excavation sites. There are multiple hidden layers beneath the city, since newer buildings have been built above the ruins of older ones. After walking along the wall, we stopped by a location believed to be the site of the Last Supper, though this belief is yet to be proven.

Speaking of holy sites, we also visited the Church of the Holy Sepulchre. Within this church occurred two of the most important events in Christianity: the crucifixion and rebirth of Jesus. 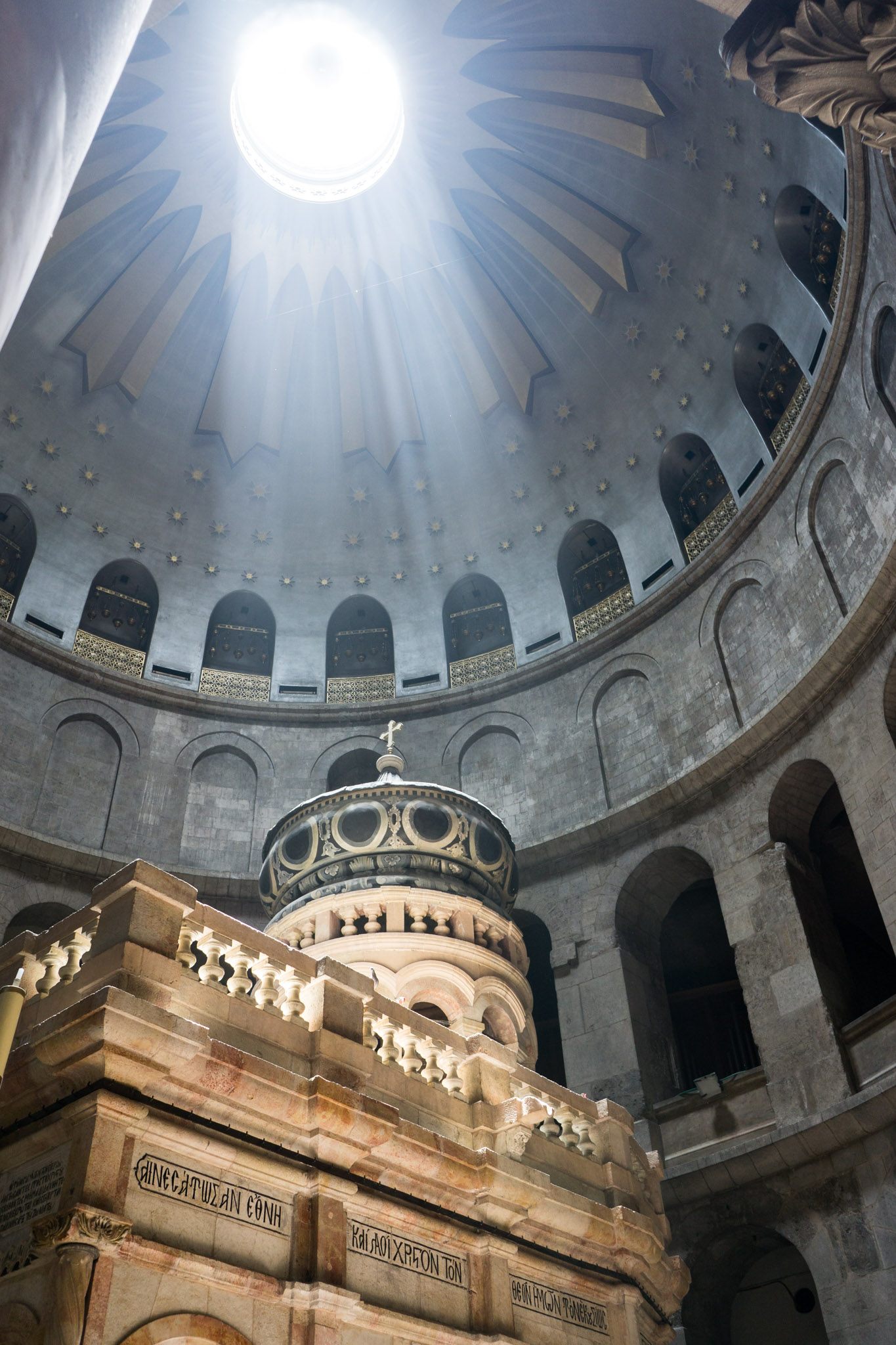 Where Jesus was rebirthed

Later that afternoon, we went to a site just outside the Old City called the City of David. It was originally a settlement intertwined with Jerusalem, and is a current excavation site. At the site originate a few underground water tunnels built by King Hezekiah (not to be confused with the term for a Japanese diner, which I originally misheard), and we got to walk through one of the somewhat-still-active ones. It was quite refreshing after walking around in 90+ degree weather all morning. 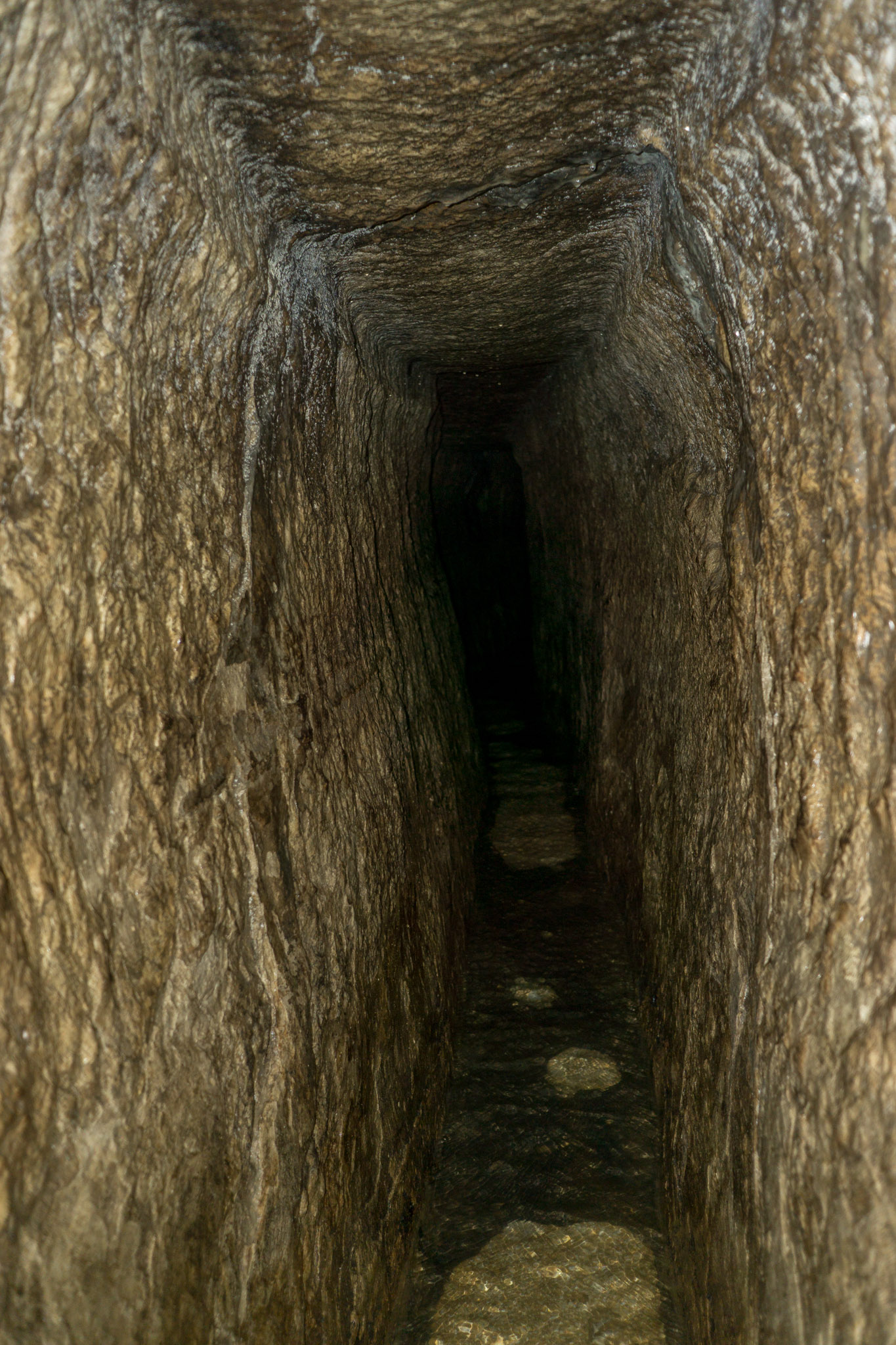 We walked on a fully-underground, millennium-old road back up to the Western Wall. There was actually a spot in the tunnel where you could see a block of stone that had fallen from the top of the wall during the one of the destructions of the Temple (pictured below).

The next day was Ellie's Bat Mitzvah, held right along the Western Wall. Ellie lead a tour through some underground tunnels along the Western Wall immediately after, and it was one of the more enjoyable tours I've been on (nice job, Ellie!). That evening, we took a bike tour around the city, though we had already visited most of the sites. In the morning, we were saying bye to Jerusalem and heading into the desert. 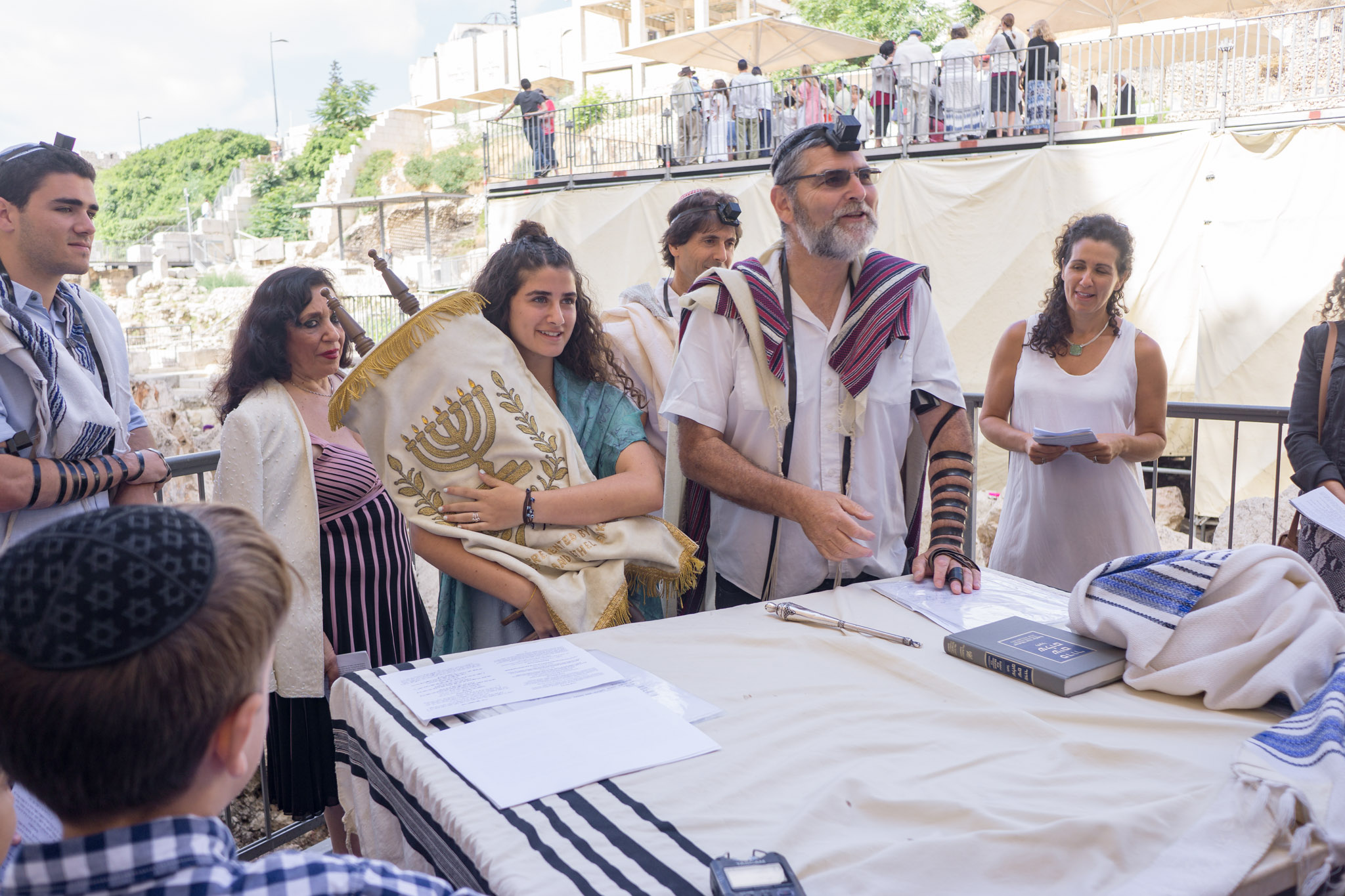 The following day was one of two days that I didn't take any pictures. We left Jerusalem and headed to Yad Vashem, the Holocaust museum, which was informative and depressing. Within the museum, there's a room recording names and biographies of Holocaust victims within books lining the walls of a memorial. There were no cameras allowed in the museum, but you can read more about the room here. After the museum, we headed to Masada, the ruins of a fort at the top of a mountain in the middle of the desert. We went to bed early in anticipation for our sunrise hike to the top.

4 AM felt early, especially with the jetlag. But hikes are fun! We didn't quite make it to the top in time for sunrise, but at least you can't really tell based on the photo. We finished exploring the top about 10 minutes before the cable car back to the bottom opened, so my dad and I jogged down while my mom and Lauren waited for the cable car. My dad and I were almost done with breakfast when they joined us in the hotel (well, we had just sat down with our food, but close enough).

After breakfast, we headed to an oasis to do more hiking. It was pretty cool to see a few waterfalls in the middle of a desert. Fortunately, this hike was more of a short walk, since we were all pretty tired from the longer hike in the morning. 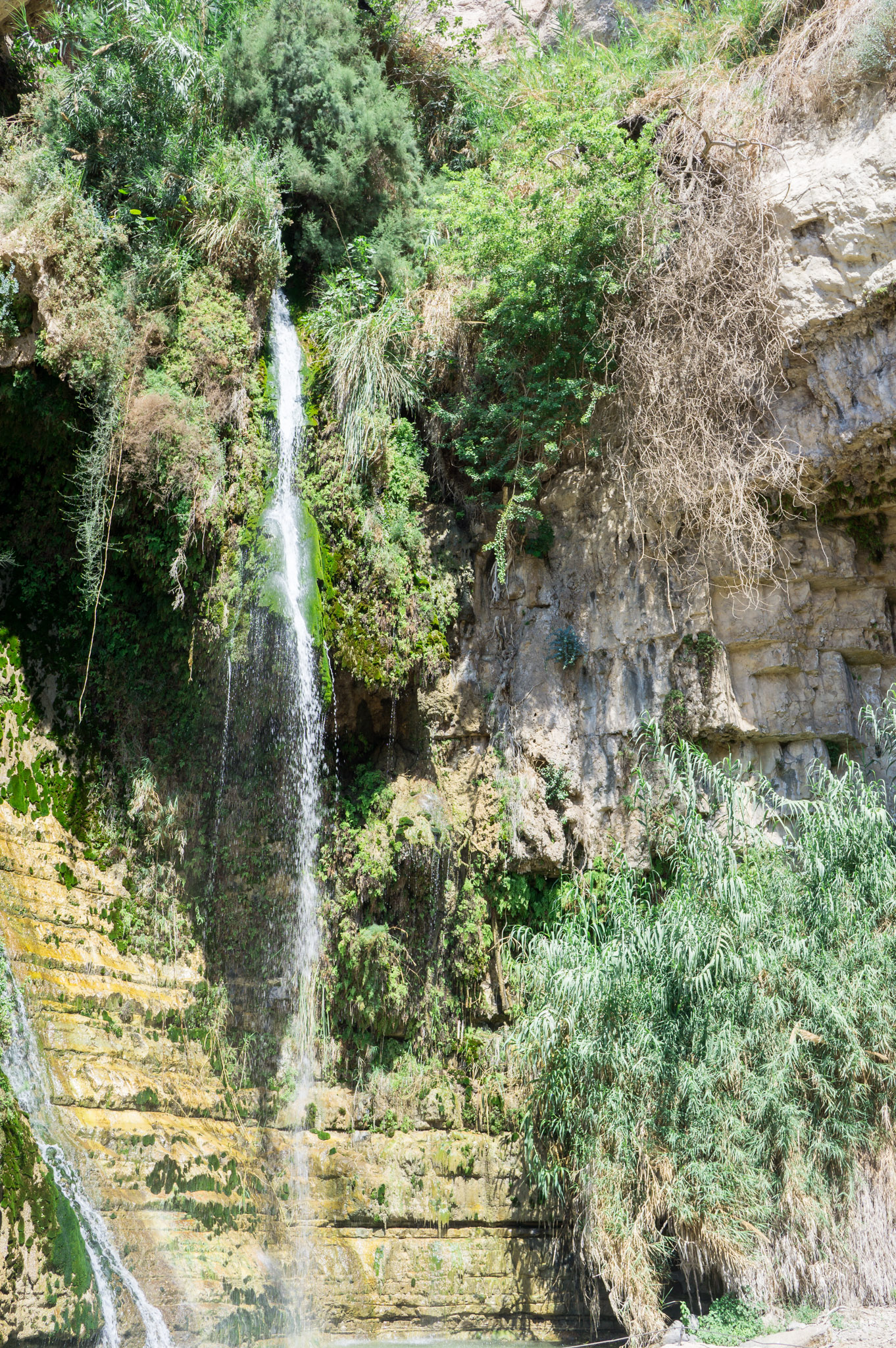 A waterfall in the middle of a desert.

The last stop for the day was at our new hotel along the Dead Sea. After a morning full of hiking in 100+ degree weather, the prospect of swimming was exciting. Unfortunately, the Dead Sea isn't the place to be swimming around underwater. I'm skeptical that diving underwater would even be possible, though, since I could easily float with my entire torso above the surface. The water is about 9 times saltier than the ocean (it's true, I tasted it), and it's recommended not to submerge your face. I'd also recommend you don't hop in the water if you have any cuts, because mine stung like crazy.

The next day was the only other day where I took no pictures. We headed the the Israel/Jordan border, and it was relatively painless crossing into Jordan. After dropping off our luggage at our new hotel, we headed to a scuba shop to get geared up for a couple dives. Even though the air temperature was well over 100 degrees, the ocean was really cold (~68 degrees). The dives were incredible; the first was around a WWII tank and the second was along a sunken ship. My mom and Lauren found $80 floating around on the second dive, which made it even better. These dives made me really want to buy an underwater camera...

Our next destination was Petra, a UNESCO World Heritage Site in the Jordan desert (and featured in the Indiana Jones movie). There were lots of impressive facades carved out of the sandstone mountains. I wonder what they did when someone messed up, since there's no perfect way to fix errors in a subtractive construction method. Later that day, we walked up 800 stairs to get to the Monastery, which was one of the most well-preserved landmarks.

Our last stop in Jordan was in the middle of the desert. Literally, that was the destination. We stayed in an area called Wadi Rum, which is a popular location for filming movies that take place in a desert (Lawrence of Arabia, The Martian, the most recent Star Wars, etc.). We took a truck tour through the desert, saw and climbed massive rock formations, rode camels, and watched the sunset. 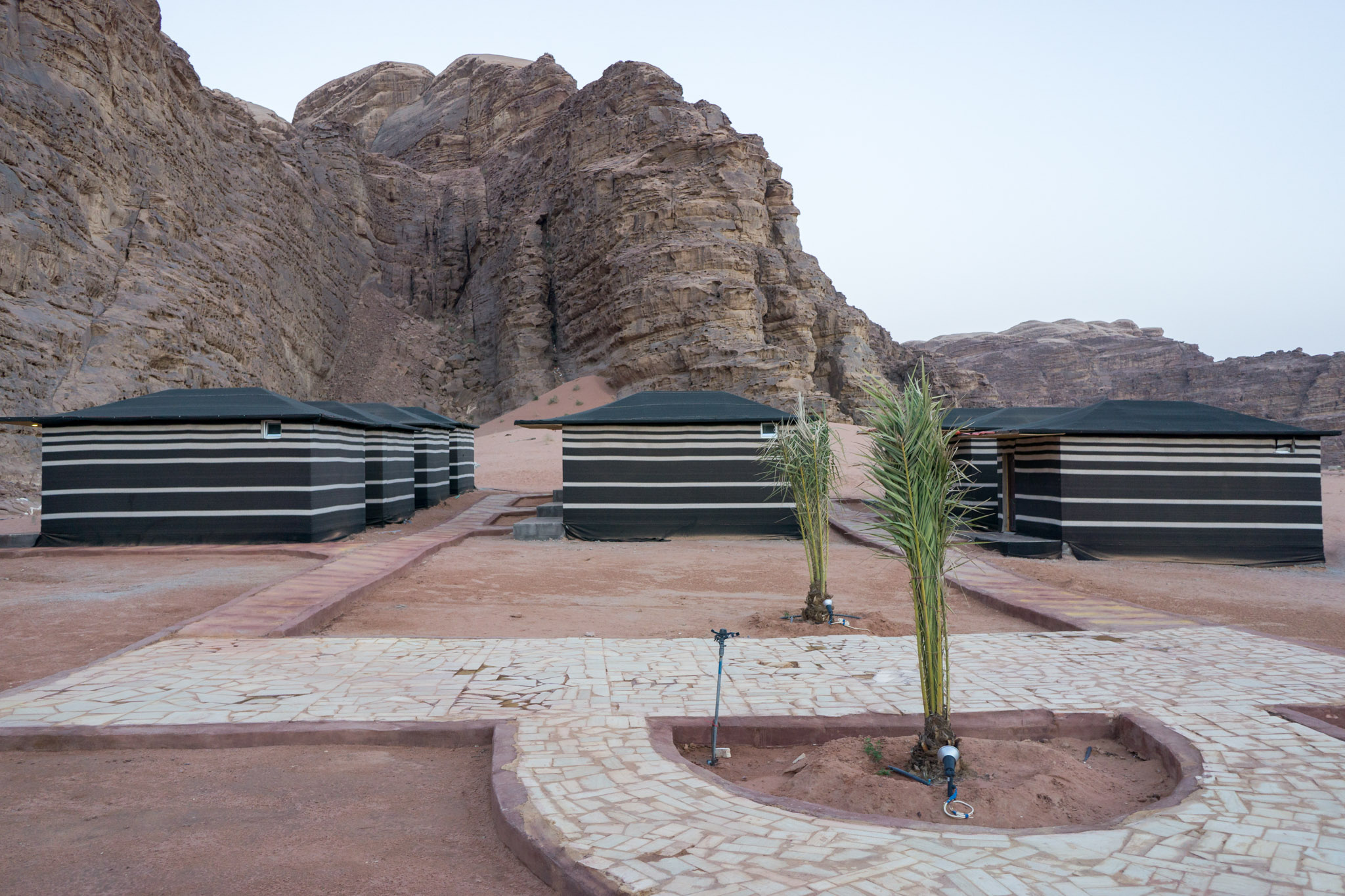 The Wadi Rum region is very sparsely populated by the Bedouin, tribes of nomadic Arabs. The new cool thing is to stay at a tourist Bedouin camp, which we did. It wasn't the most realistic experience, though, since our "hut" had filtered, heated, running water and electricity. It did lack air conditioning though, so our black concrete "hut" stayed above 90 degrees overnight, even though it was a cool 80 outside. We slept with the windows and door open until I heard coyotes howling outside. Suddenly the slightly-cooler air didn't seem so desirable. We headed back to the Jordan/Israel border in the morning.

Getting from Jordan to Israel was a lot more difficult than crossing the border from Israel to Jordan. For the first time in the trip, we could feel the tension between the countries. After answering a few questions from the armed security people and scanning all of our luggage, we entered back into Israel and headed to the airport for our flight to Tel Aviv.

I only got to spend about 6 hours in Tel Aviv, but it seemed like a cool city. We walked around a market and ate dinner, then I headed to the airport to fly back to the US and get back to work.